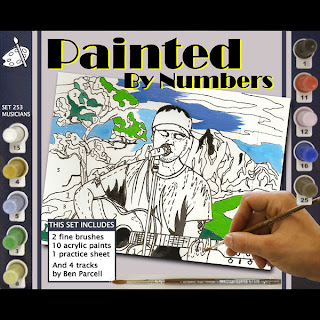 Well it's finally here, after months of blood, sweat and tears (any recording artist will understand). I present to you 'Painted By Numbers'. 4 tracks of stripped back acoustic music that I can confidently say I am super happy with how it has turned out.  I started working on this E.P in February of this year during a transition period of my music to more folkier pastures. Influenced by the new wave of folk artists: Frank Turner, Ed Sheeran and Ben Marwood and also local folk artists such as the
angelic Edwina Hayes who also kindly provided some breathtaking vocal harmonies throughout the E.P, I think it adds a nice contrast to my vocals. Thanks to Jan Moat and Kat MacIntosh for the luscious hand drawn and painted art work, and Ian Sadler who took my recordings and mixed and mastered them into something that I've never been able to achieve before with DIY mixing. The E.P is now available digitally only via iTunes at only £3.16 and most other digital music outlets. http://itunes.apple.com/gb/album/painted-by-numbers-ep/id467449868

Update: By 6pm on Monday the E.P has already gone to number 50 on the iTunes singer/songwriter chart, with your help we can take it into the top 40.

You can check also check out the official video for 'Stay In Touch' on the video below, which is taken from the E.P.